Jim Smith in conversation with Sophie Lévy Burton, November 8, 14 degrees Celsius, new moon in Scorpio. Jim arrives after visiting the White Cube Gallery, eating an apple and is calm, still, almost zen. He orders cappuccino and water. From Bishop Auckland, and still with a northern burr, he was a student at Goldsmiths’ 1983-85.

I APPLIED TO Goldsmiths’ in 1982 when I was 19 and graduated in 1985, back when the building was in Camberwell, the Millard building. It was quite gloomy I remember, a Victorian school and at odds with itself – at odds with what was being offered – education – and what the atmosphere represented, the architecture of it, institutional, dark mezzanine floors and darker basement. You had to stand on a chair to look out of the windows. And it was a quieter area at the time. Later of course they moved to New Cross.

It was the sort of place you were advised not to apply to by foundation tutors. Strange, that in itself created an air of mystery and foreboding but at the studios’ open day I immediately felt it was a part of something, quite liberating. I think perhaps because nobody really understood it. Tutors were out of touch; it was only when I wandered around that I realised I could be part of something. But it was the kind of place that you could also easily be abandoned and I don’t think that was a bad thing, I mean, like benignly abandoned – you could see immediately students work was personal, meticulous and free from the sloppy expressiveness of other schools I’d visited.

The application process and interview was easy; six tutors sitting around a table. The only one I remember clearly is Richard Wentworth, a real high priest. I’d brought lots of drawings to the interview, all the way from Bishop Auckland and the countryside in Durham, sketchings of trees etc – actually quite dangerous to do that – it was quite a rough-tough place back in the 1970s, you had to be able to fight. You might think Camberwell was dangerous, but a riot in London is a throwing out time in Bishop Auckland.

I remember my whole portfolio was scattered across this big table; I’d done these drawings influenced by Max Ernst you know, very young I was, he resonated with teenagers. Richard Wentworth was particularly interested in my drawing from life because I could draw. The drawing status back then at art school was minimal.  Life drawing was optional, poorly attended. I do remember being asked by him why I did them, these sketches.  I said smartly like, it was a way of positioning myself in the world, like a map or like evidence… I could feel the air being sucked in by the interviewers. I remember later in a tutorial he said he hadn’t done a drawing from life since he was a student.

But I remember being a little disappointed my first day, everyone looked too trendy, where were the depressed people, and the people who were carrying something, carrying secrets… But the college eventually made you that person; they pulled away a lot of your support, purposefully, so there was no taking back on comforting things in this exposure. Nowadays you can’t strip anything away, no one can criticise anything. I think they were modelling the real world, and you would either become an artist or not. Hence maybe the nostalgia for the 1980s, which I should say I don’t share. But some are nostalgic.

As soon as the first few days were over, it was obvious there was an awareness that this was something, these were people who had something.

It’s funny the things you remember from the first days. I remember a girl saying I had nice shoes. They were hand made 1960s’ patent leather with pointy toes and I’d bought them second hand on my arrival in London from Durham. I wore them mercilessly. It’s funny how my early clearest memories are about clothes. It’s a visual thing maybe, shoes are about shape – and balance – how you present yourself, and also hide yourself – and I remember thinking in those early weeks I’ve been caught hiding in my shoes. Remember it was a more naïve time back them, the 1980s, bodies and anatomy was different, pre-internet. And that was the rigour of Goldsmiths, I think it created awareness that everything you did might have a place in your art practice and should be justified, there were no throw away gestures.

Everyone struggled. It was art school and some were too bright, too shy, too intellectual. Everyone finding their own rhythm.

London in the 80s was freezing, they’re used to be beautiful red dusty London sunsets. I remember going to my friend Cornelius’s squat in an old council block, what they called the hard-to-let flats. They had no central heating but they did have an open fire – and they had nicked some old scaffolding planks from a building site next door and were pushing a plank into the fire, it was just burning away gently, ever so often they’d push it further. As an aesthetic statement it was perfect, a beautiful thing and sums up that period.

John Thompson was principal at Goldsmiths’. He had a lot of influence. His own work was respected and elusive; not really a body of work but embedded in him. He was nurturing, not judgmental like Michael Craig-Martin who had favourites. I’m not sure if it wasn’t for Damian Hirst, Goldsmiths’ the phenomena probably wouldn’t have happened. But the staff’s persistent extrusions of students’ strengths was bound to manifest in some major successes.

In my third year I shared a house with Marcus Harvey in Deptford. Marcus was better than me at drawing and I’d met him during drawing cadaver class at Goldsmiths’. There was an arrangement between UCL medical school and Goldsmiths’– students were allowed to go into the cadaver room and draw corpses. I enjoyed it, it was just very useful. The first time we went it was a bit icky, we went after to a café in Soho and I remember the toasted salami smelling like the cadavers; Marcus relished the food, I couldn’t eat.

Those cadaver classes were useful: there’s no distraction from the idea of who’re drawing. Ironically bodies are at their optimum of human expression; they’re drained of all extraneous fats, liquids; the musculature is perfectly expressed. It  givesmore to you. Bodies are bodies. It’s not about poses but being. The articulations are there.

But not many students were interested in the cadaver drawing lessons. It was old-fashioned, academic.

You ask me why some made it, some didn’t. There was an instant awareness that some people had something. Marcus was friends with Damian Hirst, they were both from Leeds, knew each other from there. The first time I met Damian I said to Marcus – he’ll be more famous than anyone, it was obvious.

Was it survival of the fittest?

I think the sense of community around Goldsmiths’ is mythical. Whilst there, there was a sense of momentum, even momentous force at play but after graduating… people generally went their own way and survived however they could. It was a branding. It’s like Qui Chang Kane from the 1970s TV series the Kung Fu-on– an intense learning period, then out in the world, to wander the world of practice what you’d been taught, a mission to upend any bad art we’d meet with.

There was a big enough range of staff there to suit the range of students. It was about luck, timing, being a favourite. Now I wonder if they are not a bit embarrassed about it, like watching an old dancer having to show its moves every time and getting more and more weary, just to keep values high for however it is that values high values.

Now years later there’s room for slow burning persistence – artist in that generation who weren’t acknowledged back then – less affected, less effected – less branded. Perhaps the weaning phase can be taken away with too early success and little of value manifest when the hype has waned hence the repeated falling back to that point in time…

I remember Carl Plackman, very private, mysterious. Tutors didn’t have to give anything away. I had a studio in his block in the east end after I’d left. He’d taught on the course. He was doing his alchemical things, making things, very private.  I knocked on his door once and asked him for a light for a fag; and he answered opening it just the tiniest crack and passing this light out, this match he’d already lit himself.There was no big welcome or remembering.

My animated film for MONK is a sample of about 3000 drawings, each drawing a slightly different character; I photograph them quite badly, and animate them ten frames per second – I don’t want to be precious about them, I don’t want them scrutinised. They’re not very good, they’re not supposed to be that good. I want them to be acknowledged without judgment.

I no longer want to work hard at making art.  I’ve done all the work and it’s time to stop doing the work now; I don’t need to refer to it. I don’t need to sketch or do life drawing. Now my workings practice, what I make is everything that I know. I think you get to a certain age where you can’t learn anymore. But you can pour things out. This sounds like wisdom but isn’t.

All I can do now is exhale. I’m exhaling, like spring water that comes through volcanic rock – it’s a purified expression of what I’ve thought about and been exposed about over thirty years.

At some point – the materials have to be left alone. 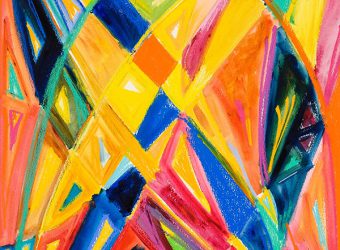 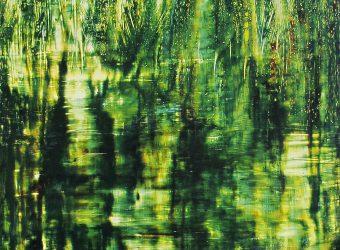 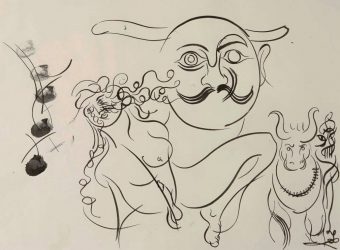