Illustration: The Presentation by Louise Sturgis

SHE WASN’T REALLY listening. She’d switched on to fill the ache of empty pockets left hanging in the air by the departure of the children. The post-Christmas landings were great vacant basins, so recently bright with exclamation or the tight knots of ancient arguments.  Any voice would do to cram those gaps with sound. But her ear was caught all of a sudden, as when the jangle of your own name might tug you from abstraction, by vaguely puzzled clever voices remarking that to become a Catholic these days, to convert, to be called a ‘Catholic writer’, seemed rather quaint. Graham Greene, the radio mused, no – not really though. Waugh, yes, he was pretty much the real thing. Muriel Spark? Definitely not. A bit of a fraud. Sharp and slick as a whip, God knows what that had been all about. But it wasn’t real.

But what about the soldier poet, the one who’d peered through the chinks of a barn at the front and seen the priest, raising his arms, and stood breathless at the beauty of it? And Charles Ryder, in

the chapel, burning anew among old stones?  But no that was Waugh, and he was supposedly real, and Charles Ryder was not. So that didn’t work.

They’d spilt into town unprepared and dazed with the resentment of upheaval. But they were small and lots of them and she was not and he had a new job and assumptions littered the packing cases like unseasonable autumn leaves. So making a bad best it was, and the first thing was to tread the new territory, walk the boundaries, mark trails with sticks and daisy chains, setting a new inventory of swings and slides, telling the landmarks: the teetering postbox, the ancient lamppost, the gate with the yapping dog, the dark house with the lolling cats, the path between the buildings where you didn’t go, and the one where you did. Library, bookshop, bench with ducks, bridge with punts, cafe where they didn’t care, and routes – short ones to relieve urgent frayed

tempers, longer ones to avoid them and eventually her heart would unwind and she would rebuild Jerusalem.

Trailing back along the river, poised between dusty satisfaction and the first splutters of tiredness, she urged them on, to round off her swallows and amazons in the usual way: some vague ritual she’d devised, some notion of punctuating mud and sand and watery happiness with half-remembered images of candles, shadows, echoes and transcendence for the future. Today’s dose of magic inoculating against the novelty of tomorrow’s false prophets. But when they got there, all ready to begin – to push open a heavy wooden door that would sweep back slowly, to step into a plunge of darkness onto cold lozenges of tiles, to dip fingers into greening stoups and scroll the air with crosses of oversized precision or distracted flaps of the hand, set to bob towards the red flame and sink onto 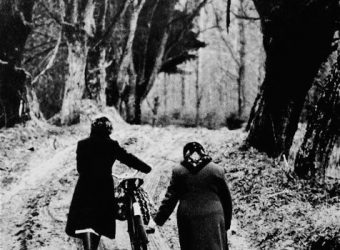