ALODIE FIELDING sits curled on her red-velvet divan surrounded by bohemian bric-a-brac, surreal paintings, large ammonite fossils and Puffin Club magazines; a modern doyenne of the enchanted silhouette, her crooked house in Streatham (she’s the business owner of the art and design house, The Crooked Style) the dark-gothick corners of her extraordinary imagination spill over the ground floor, at once family home and a psychic-mirror of her artist’s studio.

“I was brought up in Tooting in the 1970s reading Joan Aiken, building dens on the dark Common within spitting distance of the mental hospital… There were peeping toms in the bushes and the occasional escapee from the asylum. It’s part of my gothic wheelhouse…”

Now illustrating the third collection of supernatural short stories for author Sarah Gray, the techniques for drawing have changed slightly since she was a student at Falmouth producing her fairy-tale yet sinister, burlesque etchings of the circus and carnival (“I always had a penchant for a Georgian wig…”). These days she’s as likely to mix delicate pen and ink hand-drawn scenes scanned, layered and elaborated with computer craft.

I admire the current illustrations for the forthcoming collaboration, Urban Creatures. They are both shadowy and playful, full of fairy-tale mystery and urban grit – surrealistic whimsical London scenes, I’m tempted to say Dickens meets Blade Runner – there’s an integrity there that yields to the reader’s imagination, fulfilling our ancient appetite for both aural story telling and simplistic imagery.

Silhouettes strike across the page, gothicky buildings, foxes, children, pussycats, strange shadows… a visual language of their own, detailed yet illusory, meeting the imagination and also leaving the space for its own interpretation. It is a visual conjuring of the most striking kind. Not for nothing is this called the‘art of the shadow.’

So where does it all come from, I ask, that extraordinary imagination? “Stories…” she says without hesitation. “Reading as a child. A lot of Joan Aiken.” Hence the Puffin Club magazines still hugging the shelves; and then, more quixotically, she credits a 1970s’ televisual childhood with producing such an imaginative weave: “There was weird shit on telly back then, weird experimental, fantasy story telling. Catweazel with his otherworldly phone, the telling bone, Kizzy (gypsy life based on the Didakoi by Rumer Godden) Czechoslovakian animations, slower, scarier. It was entirely natural to switch the box off after watching this weird shit and go and play on the common where the flashers roamed…TV inspired rather than colonized your imagination. Kids now don’t get that space.”

Unsurprisingly for such a storyteller, there is a strong sense of journeying in her career, with repeating themes, from the burlesque etching of her student days to punk songstress in the band Scintilla, as well as episodes in pavement art, set painting and wardrobe dressing. It’s been a journey spent away from the mainstream art trends –

“I’ve always been on the outside, I’ve never conformed. At Falmouth in the 80s, installation, conceptual and abstract art was the thing; but I produced these dark, slightly sinister figurative drawings – themes (and scenes) of mask, circus and carnival. They hated it.”

Alodie is foremost (she says) an illustrator. Given the number of beautiful surrealist oil paintings in her house I would beg to differ but illustration is what turns her on and she tells me I’ve fallen into the trap of the modern English: that illustration is no art.

Arguably, she says, the illustrator’s artistic job is more psychically complex than the free-for-all expressive style of conventional artists proper. It involves a meeting between two imaginations and a filtering – artist as translator and psychic. “It wouldn’t work if we weren’t on the same wave-length…” she says of her collaboration with author Sarah Gray. Is there an archetypal language of the unconscious going on? “Actually…” she says… and I realize that like the shadow puppet theatres that inspire her, Alodie likes to throw in the mysterious curve ball. “Many people have said they think I’m psychic. I was even approached to design a tarot pack…’’

And gathering into the delicious quixotic momentum she then throws in a magnificent, magical tangent both illuminating – and romantic – that Romany blood runs through both her mother and father. “There are glimmers on both sides of my parents. It’s all rather mysterious…”

It is these gypsy relatives with their foundations in folk memory, lore and narrative that remain as grammar in Fielding’s imagination; is it I wonder the anthropology of imagination? Ancestral memory…

She pulls a face at my sophistry but points to a cabinet which belonged to her maternal grandmother stuffed with objects and family bric-a-brac, and which, whenever she stayed with her, would be emptied ritually like a curiosity chest, with stories lovingly told about each individual object, giving them a totemic resonance worthy of tribal folklore.

Mixed among her ancestors are lace-makers, seamstresses, stocking makers  – skilled work with bare hands – and medicine men, herbalists  – literally working with the country. It’s the strong sense of folk fabric and narrative element that runs through Alodie Fielding’s work and that has yet to run its full path – as she is developing her first foray into illustrating her own whimsical, anarchic stories for children.

Perhaps because of her grandmother’s stories and old wives’ tales, she felt some kindred spirit with the outsider subculture: “I always wanted to run away to the circus. I wanted to live in a caravan. Or fly the trapeze. That’s the strange thing… It’s always been there… and increasingly Id like to be in a caravan disappearing somewhere…”

She says she could easily have run away from college where she was by and large made to feel as if she wasn’t being a proper artist – that figurative wasn’t valid, not abstract enough – not proper art – despite the clear fact that she ‘knew her path’ as she says and because, that dark shadowy aspect to her work came from a painful place as her father was dying  – even more remarkably, the father who was dying was the well-known abstract artist Brian Fielding whose strong colour-filled freely expressed work summed up everything her tutors liked.

So it is even more remarkable that the youthful Alodie Fielding with such institutional consensus against her – and her parent passing – was able to maintain her rudder. She is storyteller, illustrator and artist. “And I love someone like Paula Rego for example for that fact, her fairytale-esque etching and dark humour, an artist and illustrator who didn’t mind being called an illustrator – like John Minton who was my dad’s tutor and mentor. He never made any apology for being an artist illustrator. In this country particularly we put things in boxes. It was only when I did my MA at Camberwell under Janet Woolley that I felt I didn’t need to apologize for it anymore.”

And I’m aware as I leave the dark quixotic energies of her bohemian drawing-room and emerge blinking into the lights of Streatham, that I have been mildly bewitched, mesmerised into the other-worldly theatre of Alodie Fielding’s imagination, a place where children play and ghouls trail starlight through the dark secret spaces of the soul. 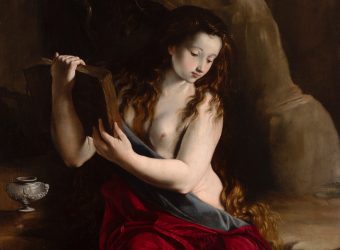 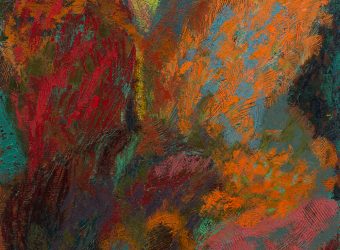 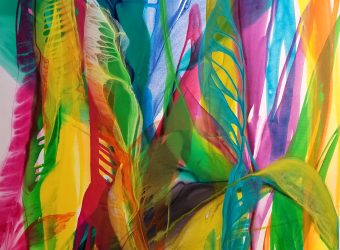