PHOTOGRAPHER ARTISTS are often troubled by the idea of landscape, and conveying our emotional, resonant connection to the experience of nature and the countryside.

It is not what we are observing that disturbs us, but in how to convey our emotional experience of the landscape to others – an audience. As Ansel Adams observed there are always two people in every picture: the photographer and the viewer.

In a mundane technical sense, recording our surroundings with silver gelatin or digital pixels so that we can look at the images to remind ourselves of what we saw and how we felt when we were there is easy – millions of images are made with cameras or phones every day. But what these records cannot convey is the emotional link we have formed with the place, the product of many things including our physical journey to get there, the weather, the noises and smells; and above all the temporal and transient nature of what we see.

But when we have walked to the top of a hill and are looking at the view, our experience and emotional response is formed over minutes or hours during which time what we see is continually changing: colours mutate, trees and plants shift with the wind, we move. When we look at the abstract topographical paintings of Richard Diebenkorn, which capture and create an emotional response to place – a sense of the place rather than a record – then the limitations of photography are exposed.

Some photographers turn to alternative technical solutions and create breathtaking images that reflect the changes in a landscape.

The Scottish photographer and sculptor Stephen Lawson makes motorised rotating cameras that record narrow strips of an image at regular intervals and the resulting panoramic photograph reveals how a view changes over a day or even a year. Lawson explains in his artist statement that, “The photo-based works grow from my background as a sculptor. These are four dimensional in concept and execution but only two dimensional in presentation. The concept of space and time is reconstructed in the mind of the viewer.” He describes his work as “Earth-art, that is, art that uses the Earth itself as the physical medium of expression.” Lawson’s “rigs” add that elusive fourth dimension as they record how the environment changes over time but stunning as they are, his images are not always able to convey the real essence of the landscape.

Landscape images created with a pinhole camera (or camera obscura) can also add this time dimension, as an exposure lasting several seconds rather than milliseconds is needed. A pinhole camera can be as simple as a box or tin, with a small pinhole in one end and a sheet of photographic paper stuck to the opposite face. During the time the photographic paper is exposed to the light, the natural movement within the landscape creates slight blurring. The photographer’s movement can also be incorporated into the image if the camera is hand-held rather than placed on a solid surface. As the camera is lensless and the aperture made by the pin is so small, the depth of field is almost infinite so distant hills are as focused as nearby foliage. The lack of a lens means that everything within the image has a softer edge and fine detail is lost – what is recorded is much more like what we actually see than the razor-sharp digital images we have become used to.

Artists who work with clay, such as the Cornish ceramicist Charlotte Jones, can physically incorporate their environment into their art by using locally sourced material. Some painters manage to solve the problem of the experience of landscape very successfully, because their paintings evolve over a longer period of time and as they paint, what they paint and how they feel changes and so they can incorporate this into their work. The Dorset painter Kit Glaisyer’s “cinematic landscapes” are made over several months and reflect the changes beautifully because he is responding – as we do when we look at his work – to how he reacts to the subject over time. He calls upon photographic images as a source material: “I then collage, invent and improvise and a painting is the finished piece.”

Another Dorset-based artist, Sarah Broome, combines digital images of landscape with paint and this juxtaposition of the instant photograph and the slower application of paint creates ethereal works that are more than the sum of their parts, capturing effectively the essence of landscape.

Mika Horie, a Japanese photographer who lives in the mountainous area of Ishikawa in Eastern Honshu, creates images that are a tangible record of her emotional links with her environment. Mika studied at Kyoto University of Art and then did an MA in European Art Practice at Kingston University. Her work is physically linked to the subject of her images whilst also involving, as does Kit Glaisyer, a long time period to create the work. Mika uses sunlight to make cyanotypes, a traditional analogue process. Cyanotypes are made by coating paper with a light sensitive chemical resulting in a vibrant indigo image that highlights the subtle variation of tones in the landscape.

Cyanotypes are a popular way of making negative images of plants – photograms or sun-prints – but Mika’s images are contact prints created using 10” X 8” negatives from a vintage wooden film camera. The negative is placed directly onto traditional Japanese Washi paper and exposed to sunlight. Mika makes the paper herself using sustainably harvested bark from wild gampi trees that grow in the surrounding forests. This is a time-consuming task. The gampi has to be peeled, boiled (in water from the spring in her garden) for several hours, beaten and then made into paper using traditional methods. Mika uses paper made in this way because, “Japanese history is written on strong Japanese paper and I want my photos to be a form of local history.”

The resulting pieces, as well as being beautiful almost abstract images in their own right, have a textural and organic relationship with the place where they were created. Mika’s work has been celebrated and exhibited around the world, most recently at Photo London, Photo Basel and Unseen Amsterdam, because it invokes her emotional response to the landscape in which she lives and works. When you hold one of Mika’s images, you are in physical contact with the environment in which it was created. Mika’s rationale is this: “Throughout my career as a photographer I’ve focused on discovering the sense of beauty that runs from ancient to present times. Using time-honoured techniques and materials encourages people to think about sustainability in our modern society. I have tried to learn the ‘old ways’ of living surrounded by nature and magnificent scenery on a daily basis.” The Financial Times website review of her work at Art Basel celebrates her use of handmade paper as it “allows the blue pigments to soak through the pillowy surface with a sumptuousness reminiscent of ink drawings.” Each piece is unique because of the variations of tone and texture inherent in the process of making the paper, hand-painting it with iron salts and in how it responds to the sunlight. The image of the landscape becomes part of the paper, itself a product of that same landscape.

My own answer to the landscape conundrum is to turn to another traditional photographic process – lumen prints. Lumen images are made when black and white silver gelatin photographic paper is exposed to sunlight for a long period and in a seemingly miraculous way transforms itself into a range of pinks, browns, greys, blues and greens. The result is unpredictable and depends on the length of exposure and the type and age of the photographic paper. The images invoke the topography of West Dorset and by using plants and minerals – salts, soil, mud – incorporate the physical environment. The image takes several hours’ exposure in sunlight to achieve the tones and textures I want, and the end result, as well as being unpredictable, is rooted in the physical environment. Weather affects the final image – an overcast day requires longer exposures and creates different colours, and rain or mist seeps into the paper affecting the shades and creating stains. Insects squeeze under the sheets of glass I use to keep the organic material in place, and over time the plants themselves generate moisture, shrink and change colour. For me, the most fascinating part of making these images is that by recording them, they are destroyed. Unlike traditional darkroom photography, the image is created by the reaction of the chemicals in the paper to sunlight – there is no tray of photographic developer to turn the latent image into something visible. Chemical fixing, which makes the image permanent, dulls and changes the colours and so the only way of preserving the original image is to digitally scan it – which in itself changes the image as it exposes the paper to more light. Without fixing, the image gradually loses contrast and eventually disappears. As the landscape changes over time, so does my response to it.

From Dorset’s Jurassic Coast to Japan, the strands that link this broad spectrum of artistic approaches are time and tangibility. Whether achieved through self-made mechanical cameras and artefacts or through time-intensive processes, there are physical and temporal elements that all these artists use to explain their emotional and spiritual relationship with landscape. 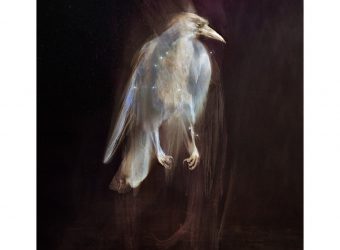 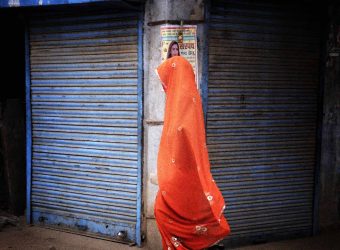