THE GIRL STOOD beside the gate at the top of a field, looking down toward its centre. There, a tree grew from the ruins of an old farmhouse. Though her entire childhood had been spent in and around these fields and though she could map the web of narrow roads as accurately as a hawk, this field was unknown to her. That morning, she had come upon an unknown way, diverging from her usual route and now stood in wonder at the scene before her; this solemn little building emerging from the silver morning fog as it began to clear.
December was drawing out the severe beauty of the land, like oil from a seed. But this abandoned sward seemed more desolate and remote than those with which she was familiar. The trees lining the outer border were showing their age. Their thick exposed roots seemed to swell from the dark earth; their branches twisted like knuckles around the joints of neighbouring trees. Any life their limbs once bore had decayed and dropped from their barren grimace. Those fallen, lay blackened on the wet ground.
The girl too had her own severity. Her grey eyes, fixed within the small arch of her brow and her pale skin, had travelled as far as the grey that carried the sky. She pulled herself up over the gate, clutching the metal before landing in the deep grass. With heavy steps, she cut a narrow path toward the ruin.
As the ruin grew closer, she could see more clearly the dark redness of the bricks, a deep muted colour, like fertile earth. She finally stepped out from the grassy entanglement, balancing against the crumbling corner of the building, treading carefully till she came to the empty doorway. Inside, the floor had vanished, the foundations having completely decayed. In their place, a thick carpet of short grass like turf, littered with heavy slabs of rubble. The grass was barely distinguishable from the moss growing on the fallen bricks. The inner structure had been reduced to a long stone atrium, the length of the room had become a church aisle; the tree standing against the far wall, an altar.

The tree was much younger than those on the border. Its trunk was thin but solid, the bark smooth and darkly golden in the shade. The girl pressed her hands upon it, feeling the steady pulse in her fingers against its solidity as though her pulse belonged to the tree itself. She looked up to the branches. Tender emerald leaves grew on the barely outstretched limbs, unblemished by the onset of winter. The sun now breaking from the fog, shone through the branches, illuminating the leaves like a crown. The girl closed her eyes and felt the sun’s warmth recover feeling in her cheeks, her hands still firmly pressed against the tree.
She rested there a moment, lowered her arms and leant her forehead against the bark. Just then, a great serenity washed over her. It was unlike any sense she could describe. The body of the tree was warm like the chest of an animal, a mammalian heart beating softly beneath the wood. A breeze moved through the ruin and a cold drop fell on her wrist. She felt the droplet move down her hand, running over one of her fingers. Above her she saw between the meeting point of two branches, a fissure opening and exposing a tear in the wood’s fibres. From this wound, bled a thin white secretion running down the trunk. She stepped back calmly. A cold unease occupied the former warmth the tree had provided. She watched the fissure continue to slowly weep. Stepping forward, she reached as high as she could and placed her fingers on the tearing. She applied only the slightest pressure and the wound gave way. 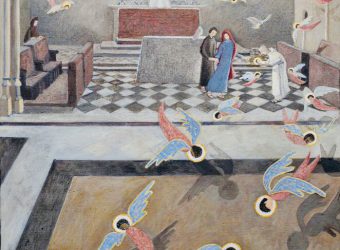